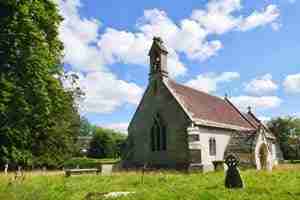 The Parish of Sherrington is a wonderful village with a population of about 60. In the parish church of St Cosmas and St Damian, we hold six services a year covering the main church festivals, including a Matins and a united Team service of Evensong which are always well attended. We also say Morning Prayer every Thursday in our beautiful church, a perfect way to start the day.

The Church fabric, repairs, insurance and electrical costs are generously covered by the ‘Friends of Sherrington Church’, without whom the continued running of our active church in this small village would not be sustainable. Our charming Grade 1 listed church with historic painted wall-texts and some very antique stained glass widows is also available, and used, for various Village Meetings.

Although a smaller village, Sherrington has continued to mark the major seasons of the Church. In 2019 during Lent we held Evensong, led by Katherine Venning the Team Lay Reader, and Easter saw Jane Shaw, one of our clergy leading a children's activity day on Holy Saturday, making an Easter Garden to display at the Easter service, and also decorating Easter cards. Our Easter Day Eucharist, also conducted by Jane, was very well attended and the church looked lovely, with masses of local daffodils. Ascension Day was marked with a Team service in the evening, led by Rev Ali Morley and the choir, and the service was followed by sparkling wine and nibbles, to complete the festive atmosphere.

Sherrington is built around spring-fed old water cress beds overlooked by thatched cottages; it is the jewel in the Wylye Valley crown.  The mix of residents is very varied - retired, working from home or commuting elsewhere. Several have homes elsewhere so it is a week-end paradise for some.

We welcome you to Sherrington, and would love you to join us at one of our services or events. Our parish church provides gentle place where all people can connect with God in the peace and quiet, and in the beauty of God’s creation in which we are situated.

Why not visit our village for a gentle stroll and enjoy watching the Kingfishers and our resident pair of Mute Swans. Take the weight off your feet and enjoy a sit in our churchyard where in the evenings  a communal roost of up to twelve Little Egrets can be seen and a pair of Water Rails lurk in the reeds.

All are welcome to our village and church, and we hope that you find rest and peace in God to refresh you as you go on your way in life’s journey.

The history of the church is quite interesting.

We know that there was a minister here in the 12th century, a man named Odo of Cerintonia, who was also known as a writer of fables. The earliest part of the current church, however, dates to the 13th century. The dedication to St Cosmas and St Damian is rare in England; there are just 5 churches in the country bearing this dedication. Cosmas and Damian were Syrian brothers, and the patron saints of travellers and healing.The earliest feature of the church is the font, but there is more to the font than meets the eye. Behind the font, leading under the church towards the moat surrounding the castle motte is a channel, or drain. In 1959 restoration revealed a skeleton in the drain channel. An odd place for a burial indeed, but perhaps the skeleton predated the church and was that of a murdered man thrown into the ditch. We simply don't know but it adds a bit of mystery!

The church was rebuilt in 1624, and the interior is like a time-capsule of Jacobean style, with a waggon roof, carved bench ends, and communion rails. When the church was restored in 1959 a skeleton was found in a hollow under the organ. This was probably the remains of a Tudor rector named John Carter (d. 1554) whose will asked that he be buried 'in the Chauncell of Cosme and Damian'.

The pulpit is late 17th century, and if you open the door you can see, set into the interior wall, tablet with the initials G.I. and the date 1614. There is an amusing storey attached to the pulpit; apparently the door had to be widened because it was too narrow for a rector named Mason Anderson. He must have been a large man, for he had a hole made in the floor of the nearby rectory so that he could be winched up to bed each evening, seated in a chair.

On the walls are a series of Jacobean texts, surrounded by pillar and scroll decoration. These texts were used in Tudor and Jacobean churches as a form of religious education, replacing the imagery of medieval paintings. Sherrington church possesses an unusually complete version of the Jacobean text.Entering the chancel the two westernmost windows hae lovely 14th century glass, gathered here from around the church. You can make out a figure of St John the Evangelist among the fragments. Elsewhere are 5 panels of medieval glass brought from the European continent. One roundel behind the altar shows St Rosalie of Palermo, with an inscription describing her as 'Patroness against the Plague', a reminder of how big a role the deadly plague played in medieval life.

Among the historic monuments in the chancel is a grave slab, obscured by the altar table, to William Hobbs, who died in 1670. There is a royal coat of arms to Queen Anne, and a 17th century needlework cross of Spanish workmanship.

Over the south porch is an heraldic shield to Thomas Lambert of Boyton, who owned the estate from 1608. 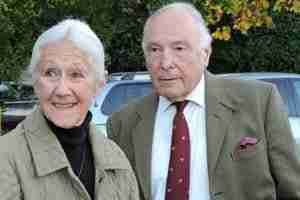 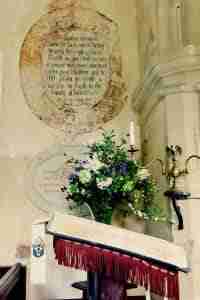 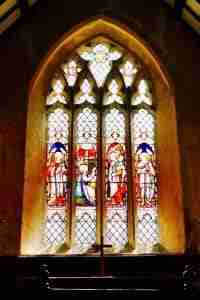 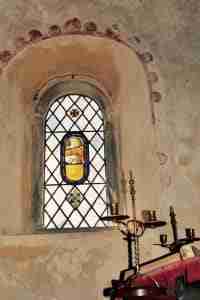 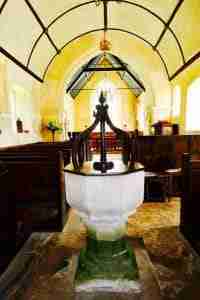 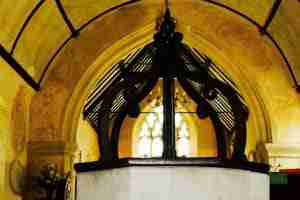 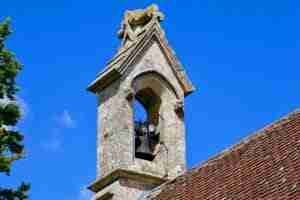 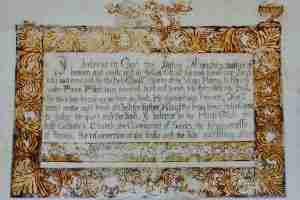 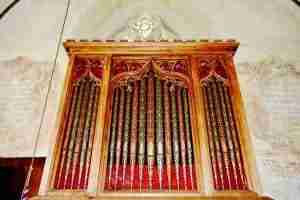 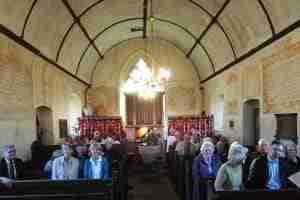 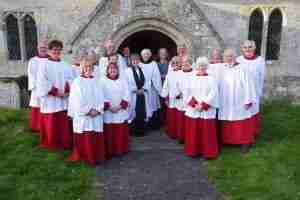 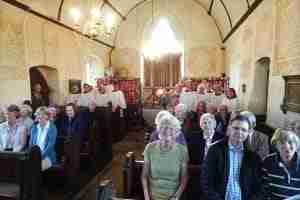