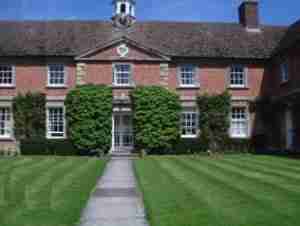 The Hospital of St. John is a charity and almshouse, which provides affordable housing for older people in need. It was founded in 1449; it was endowed in 1472, and is now governed by a Scheme of the Charity Commission dated 5"' January 1989.

The Hospital is located in the village of Heytesbury on a site of approximately two acres. There are 33 units of accommodation in total, of which two are allocated to staff. Of the remainder, some are for single occupancy, some are suitable for single or double, and some exclusively for double occupancy.

The accommodation is contained in a number of buildings including a Georgian Grade II Listed building, two-storey apartment buildings, and bungalows constructed between 1970 and 1976.

St John's Hospital has a chapel and there are a number of services held there each week.

The link to their web site is here - St Johns Hospital.

Hospital Chapel Services are Sundays at 10.30am Eucharist with hymns and Wednesdays at 10 am Holy Communion.

The History of St John's Hospital

Most Heytesbury people know about the Hungerford Almshouse, commonly called St. John’s Hospital. Its full dedication is to St. John the Baptist and St. Katherine. Lady Margaret Hungerford died in 1479 and was buried with her husband in the Chapel of Our Lady in the Cathedral at Salisbury. Her greatest memorial is the Heytesbury Almshouse, founded by her father-in-law, Walter, first Lord Hungerford, because by her self sacrifice and perseverance she succeeding in endowing it. She did this in the name and for the honour of her late father-in-law and her husband Walter and Robert, Lords of Hungerford and Heytesbury.

There are 18 similar hospitals or almshouses in Wiltshire. The Foundation Deed is dated April 4th, 1472, reciting Letters Patent of Edward the Fourth and it instructs certain Trustees to found, create, erect and establish a certain almshouse which shall last forever, consisting always of a chaplain, twelve poor men and one woman, of whom the chaplain shall be warden of the same house constantly at Heightsbury in the County of Wilts; “for doing and performing of divine services and other orations everyday in the parish church of Heightsbury aforesaid, for our well-being and that of our beloved consort, Elizabeth Queen of England, and of the Reverant Father in Christ, Richard Beauchamp, Bishop of Sarum, while we live and for our souls when we have departed this life . . . . ”

There follows in this repetitive medieval language all the details about the running and maintenance of the almshouse. The hospital has remained substantially unchanged until this day according to the wishes of the Hungerfords. Its constitution was elaborated in 48 statutes, dated February 20th, 1472. After the death of Lady Margaret, the Custos was to be appointed, as he still is, by the Chancellor of Salisbury Cathedral. He can, however, be removed by the Dean and Chapter of Salisbury if he misbehaves or fails to observe the statutes of the hospital. On admission the Custos had to take an Oath to observe these statutes, and he had also to make an inventory of the goods of the house. Hisduties included the administration of the hospital, the celebration of divine service both there and in the parish church of Heytesbury, daily, when he is disposed, prayers for various members of the Hungerford family and their retainers, and teach grammar to the poor children of Heytesbury. He was not originally permitted to hold any other benefice, or to be absent from Heytesbury for more than a month at any one time. In selecting the poor men, servants or tenants of the Hungerford family were to be preferred. No married man was to be admitted, and all had to live a common life and not to go away without permission. They had to pray daily for their benefactors and if they did not know the prayers these must be taught them.

If they had any goods when they entered the house, half of these were taken for the use of the house, and if at any time their income should exceed four marks yearly they were to be excluded. The woman had to look after them all, to do the washing and to care for the poor men when they were sick. All were to be given two pairs of hose, two pairs of shoes and two shirts each year. Every second or third year they were also to receive gowns and hoods of white woollen cloth with Jhu and Xrt (Jesus Christ) in black letters on the breast and on the shoulders. There was a weekly allowance for commons varying with the price of wheat, and the woman was also to have 5/- a year to buy a kirtle and 13/4d. for her labours. The hospital had a common chest for its money and records and a common seal, which now stands in the main Entrance Hall of the Hospital. It has four locks, the keys of which were held by the Lord of the Manor, the Custos and two Trustworthy Parishioners of Heytesbury, appointed by the Dean of Salisbury. Another chest in the parish church held its books, but this is now in the County Archives at Trowbridge.

The original endowment consisted of the manors of Cheverell Burnell and Cheverell Hales (Great Cheverell) with 20 cartloads of wood yearly from Southleigh. Later in 1633 the hospital had property in Upton Scudamore, Calne, Stockley and Warminster.

During the Reformation and the Dissolution of the monasteries, the hospital escaped closure, but its annual revenue of £42 was taken by the Crown and given to Sir William Sharington. Cardinal Pole later interested himself in the restoration of the hospital to its proper use and restored its revenue, and this was confirmed by Elizabeth the First. From this time there was a separate school and a schoolmaster who received £10 a year for doing the teaching, raised in 1607 to £15. At this time, too, some modifications of the religious duties of the Custos were made consequent upon the reformation of the Church of England.

On June 12th, 1765, the almshouse was destroyed by fire and was rebuilt in 1766-7. This was the Great Fire of Heytesbury which burnt nearly all the town. The following words were worked upon a sampler made by Alice Snelgrove in 1790 . . . Be it remembered that on Wednesday, the 12th day of June, 1765, about 12 o’clock in the forenoon, a dreadful fire began at the West end of the Town of Heytesbury, in the County of Wilts, at a house then in the occupation of Mr. William Wilkins, which burnt with such irresistible violence (the wind then blowing very briskly from the West, and the weather very dry), that notwithstanding the endeavour of the Inhabitants and neighbourhood, with the help of 3 Engines to stop its progress, the hospital and chapel adjoining thereto, together with the free-schools, barns, stables, out-houses, ricks of corn and hay, belonging to the several Farms, Stocks in Trade, and other effects; the whole loss being then computed at 13 thousand pounds. Two persons were miserably burnt, one of them an old woman between 70 and 80 years of age, the other a child of 19 months old, who died a few days afterwards. Many of the Inhabitants being destitute of houses, were forced to take up their lodgings in the church, till houses could be produced for them. - Alice Geo. Snelgrove‘s work, Ramsey, April th 21st, 1790.”

Towards the end of the 18th century the cartload of wood which had been drawn from Southleigh for over 300 years was converted into an annual rent of £14. The Rev. David Williams, vicar of Heytesbury, becme Custos as well as Vicar by which time the schoolmaster had long disappeared for lack of boys eager to learn Latin, and the poor men’s uniform had been changed from white to scarlet with a badge of blue letters IHS - Latin for Jes hominum salvator = Jesus the Saviour of Men. It was in these scarlet cloaks and silk hats that the poor men attended the parish church on Sunday mornings and sat together for service. A portrait of one of them outside the Parish Church is produced on the front cover of this booklet. These cloaks and silk hats were finally abolished about 1958.

Among the interesting characters who were one of the “poor men” was James Farley who died in 1881. He was one of the guards on the island of St. Helena who had to challenge Napoleon with the words: “Who goes there?” To which, he said, Napoleon always answered: Emperor,” and James would reply: “Pass, Emperor”.

The constitution of the Hospital has been revised from time to time to accommodate itself to changing conditions. It is now governed by 9 Trustees - the Lord of the Manor, the Chancellor of Salisbury Cathedral, the Vicar and the two Churchwardens of Heytesbury, the Custos and three others, who must be resident in Wiltshire, and approved by the Charity Commissioners.

The present building dates from 1766-7 after the Great Fire. It cost about £1,600! It was built round three sides of a rectangle with a coach house at the north corner, and a clock with bell over the main entrance. The architect was Esau Reynolds of Trowbridge.

In 1962 a major development took place, the first in over 500 years; flats for married couples were provided, at a cost of £38,000, and the coach house was converted into a chapel. The altar cross was presented by Mrs. Clare Smith, then of Heytesbury and Chairman of the Trustees. The Rt. Revd. Victor Pike, Bishop of Sherborne, dedicated the new work, and Mrs. Roger Scott of Crockerton, a connection of the ancient family of the Hungerfords, through marriage, unveiled a plaque. She was deputising for Beryl, Lady Heytesbury, who was indisposed at the time, and who died in 1968.